Unfortunately the discussion begins with an apology. Werner Ruzicka is sorry for the technical problems, which had occurred while the film was shown. Despite that, he points out that James Benning’s screening of Ruhr has surely been a precious and impressing opening for the 33rd filmweek.

What was the original attraction? Why the Ruhr Valley?

James Benning felt familiar with the location. Having grown up in an industrial and working class environment like Milwaukee, he noticed an immediate connection to the working class area Ruhr Valley. The author normally works on films about places he knows very well. Since this was not the case in Ruhr, his approach was slightly different. He got to know the places while putting them on digital video. Ruhr is not a portrait, but rather a ‘deep map’ on HD.

Benning is aware of the fact that his films can be difficult for the audience. The process might not reveal itself, if you are not used to absorbing the images deeply. A viewer has to be open to working on the image he sees. It forces you to compare what you see and hear to what you know. It forces you to find what is inside you. It is hard work.

How were the images finally chosen?

James Benning’s film now contains six shots. The original number was around 20. Including the Rhine River and more parts of the steel mill. In the end, only a limited number of the images were really ‘speaking’ to him.

What about the possible extension of time because of the format digital video?

James Benning reminds the audience of 16mm reels with a maximum time of 11 minutes. Ruhr is his first work on HD video. With modern card storage systems, he could soon be able to shoot a four hour shot. ‘This doesn’t necessarily mean I do it,’ but it makes life easier. Especially in cases like the coke tower shot: It lasts one hour. In reality, 1 1⁄2 hours had passed by. An important part was the dissolving from day to night. So the author decided to manipulate. He speeded up the sunset. Secretly. He used video’s ability to ‘completely hide the ellipse of time.’ James Bennings manipulations are taking a different route. He is manipulating to achieve more truthfulness. The iterations of steaming differ from 10 to 20 minutes. By showing a shot of one hour length, the author gives the possibility to undergo the process of waiting. You can find your own kind of rhythm. It is about anticipation, waiting and expectations. It is what you see in the picture, because you find it in yourself.

James Benning offers his view into the future: HD is the end of filmmaking as we know it. With better resolution, but fewer distribution costs, we will see works that are far more real and less nostalgic. In consequence we have to ‘embrace HD.’ A deeper view into the topic can be found in James Benning’s article on www.dock-duisburg.de. There will also be a DVD collection with his works. The filmmuseum Vienna has taken care of some of his (also unseen) films. Benning is not keen on being a capitalistic scrooge. He is planning to digitize his work and therefore to offer his films for free to be downloadable in the internet.

The different images are being discussed. With time and attention given, you can share Benning’s sensation of vulnerability and fear in the first shot. One might feel trapped in the tunnel. The man on the bicycle offers a comic relief. A floating autumn leaf ends the image. A flying plastic bag had already opened it. The tunnel shot works in a very narrative way.

One viewer is curious about the ‘music’ in the first shot. Astonishingly it is the sound that occurred in the moment and not composed music. We can hear trains crossing and whistling. The blowing whistles really appear as if they were arranged, composed for the shot.

Werner Ruzicka is looking for metaphors. Does the author accept an interpretation of isolation and loneliness?

James Benning agrees by saying that there are loaded images. There is an airplane, praying muslims and a tower. After three weeks of editing, he realized a possible connection and was quite shocked about what he had created. Due to media’s education and the people’s general memory, strongly prejudiced interpretations are possible.

One member of the audience found his own connections between all six shots. In his view the images are all dissolving themselves. Nevertheless he is doubtful and calls his idea possibly ‘klugscheißerisch’ (in German). As an example, Benning chooses to talk about the cleaning of the Serra sculpture. There are many possible interpretations. It all depends on the viewers knowledge and access. Who decides in the end, what is art? One who doesn’t know Richard Serra’s work might consider the destruction of the graffiti paintings a brutal act. One might simply dismiss the image and wait for the next one. James Benning shares with the audience that he is very aware of the confusion his images provoke. Everybody’s own history and thoughts make the image. It is hard work.

The author also reveals the manipulations in the Essen street shot. Benning cut out several persons, made the moment less active. He emptied the street. A viewer expresses his amazement that in this particular shot you can hardly hear the Autobahn, which is 300meter away from the location. Benning: ‘You have to watch it in another theatre!’ It would have to be a screening without a ‘gremlin’ inside the projector. The participants agree in their sadness about the sound problems of the screening. There was no way of avoiding it. Gremlins just happen. 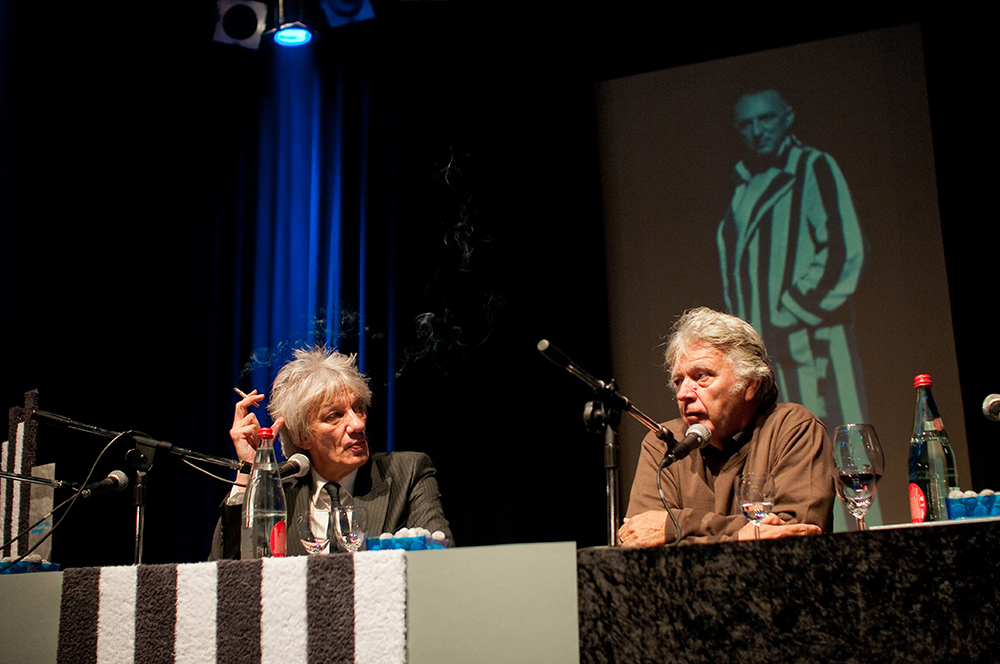